Kristine Poole‘s expressive, classically rendered clay sculptures are contemporized through the artist’s exposure of inner landscapes on external forms. Powerful lines of script are carved onto the surface of Poole’s female figures, merging posture and gesture with the power of the spoken word. The Santa Fe sculptor’s latest piece is a break from her typical style but with a consistent underlying theme. We talked with Poole about “Commodity” and the meaning behind it in the Q&A below.

(EVOKE) “Commodity” is the first piece you have done in the graffiti airbrush style. What inspired you to explore this direction and how is the process different from your other work?

(KP) Much of my work deals with women’s experiences and the power that words have to define and shape the realities we live in – this piece is another development of combining words with imagery. Putting text on a sculpture juxtaposes our instinctive and visceral response to body language with a more intellectual response to interpreting the written word. In this case, there’s an additional layer of contrast in the graffiti itself which combines the visual elements of color and shape with the text element.

There were two things that directly inspired “Commodity.” The first was the significant impact of reading many articles on child marriages – in particular, the stories of young girls being committed against their will into marriages to men decades older than themselves. The second was several conversations I had with my nieces. I was aware of the problem of human trafficking across the world, but through the conversations with these young women, I saw that human trafficking is a very real concern and fear for young women even in places that would generally seem safe.

Graffiti is often considered an act of vandalism. In “Commodity,” I used the graffiti to represent the vandalization of a young girl’s life, the desecration of something sacred – her body and her soul.

This process is different from my other work in that I usually choose more “sculptural” surface treatments, enhancing the natural color and feeling of the clay. Doing the graffiti type of surface involved learning how to use an airbrush and new materials coupled with lots of practice. My husband, Colin, a painter and sculptor, was instrumental in helping me to navigate these new techniques. We frequently collaborate on sculptures and in this particular case, you can see his hand in several of the accent glyphs. 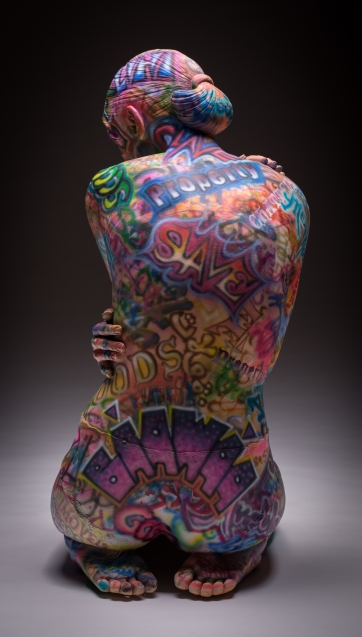 (E) On the surface of the piece you have graffitied words in many languages that speak to a larger theme. Can you tell us why you chose words such as “property,” “chattels,” “goods,” “possession” and “payment” and how this piece fits into a larger sociocultural context?

(KP) The words I chose represent the use of women as a societal commodity – as payment for debts or a source of income. They symbolize women being relegated to the status of property, chattels and possessions – not independent human beings free to choose their own destiny.

“Commodity” is graffitied with these words in fourteen languages representing the countries with the highest incidence rates as well as the world-wide occurrence of these phenomena. The variety of languages also speaks to the necessity of world-wide cooperation to create a solution.

While my focus in this piece was specifically on these two topics, one can’t avoid the underlying reference to historical issues regarding the domination of women and the ownership of women’s bodies, a conflict that continues in many societies to this day.

(E) How does the landscape of the body, including specific forms and positioning of the figure, relate to its overlaying text?

(KP) Originally, I wanted the figure to feel isolated and disconsolate. I asked our model to imagine how she would feel if she’d just been told that she had been promised in marriage to a much older man she didn’t know and didn’t want to marry. This was the first pose she went into and I felt it captured her feelings of fear and confinement perfectly.

There is an intentional juxtaposition in the bright colors of the graffiti with the doleful nature of her body language, representing a contrast in what she is experiencing with the lack of concern for her feelings, wishes and well-being.

(E) Did you work from a live model?

(KP) Yes, we have many models that we work with on various projects. We work in a very interactive way with our models, describing the idea we’re after and allowing them to bring their feelings and interpretations into the mix rather than telling them specifically how to pose. Like method acting, we feel there is something more genuine in the gesture when a model imagines experiencing the story they are posing for. This brings a bit of theater into our modeling sessions, and for that reason, we have had to search long and far for models that are able to generate the kind of energy and interaction we require.

Given the time it takes to build a life-sized clay sculpture, I first use photo reference of our model in roughing in the figure. I don’t believe there is any model who’d be interested in sitting there for weeks at a time as I roll and assemble coils. Once the rough gesture of the entire figure has been established, I bring the model back in and work directly from life to refine details.

(E) Do you plan to continue to work in this style? How do you see it evolving?

(KP) I imagine there will be more works in the works in this style. The combination of text and the figure has been an element of my sculpture for decades and I still find it fascinating. This is just a guess, but I can imagine the process evolving to include pictorial elements as well as text.